Leading Courageously on Behalf of Orphans

If you know Cole, you know he loves to talk. It’s easy to see his sense of humor and wit as he communicates through his electronic communication aid. And not only that, it doesn’t take long to hear his dislike for the Ohio State Buckeyes, his love for his Michigan Wolverines and his deep passion for God and for orphans. We won’t soon forget the day that Cole typed out this passionate plea on his screen, “I want to help the orphans who have less than I have.” God changed his life when he made his commitment to follow Jesus. He loves because God first loved him.  Sure, he has questions about why God created him with cerebral palsy, but he has decided to live his life for Jesus and to love orphans like his God does. God changed Cole’s life. 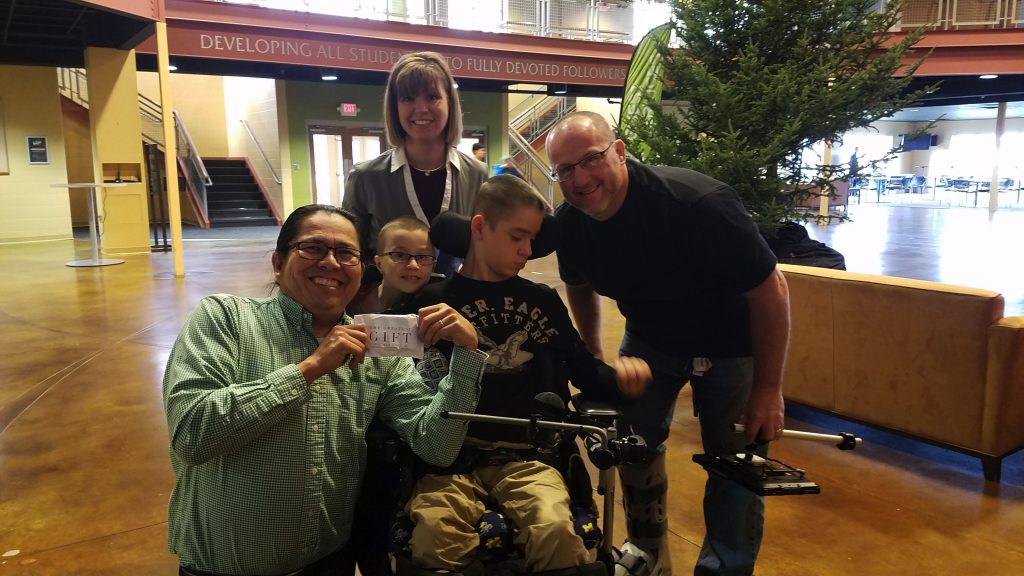 He took all of his Christmas money, even asking his grandparents to give him money instead of gifts so that he could give it away to orphans in SE Asia. Then, last Christmas (2017), Cole wanted to give more. He had the idea that he could make Buckeye necklaces for people to give a donation to rescue orphan children. Despite Cole’s extreme love for the Michigan Wolverines and his physical limitations, he was on a mission to make Buckeye necklaces and raise as much money for orphan care as possible.  Along with his brother Parker and their parents, Cole mobilized his whole family to care for our kids in Southeast Asia.

The plan was in place, but they couldn’t find enough buckeyes when they decided to make the necklaces. They made the necklaces they could, and received some donations, but Cole wasn’t satisfied and wanted to give more.

The following year, Cole and Parker spent hours collecting buckeyes (from their grandparents houses), drilling holes, pushing needles through the holes, stringing various sized necklaces for kids and adults, promoting, asking for donations, and gathering donations. Their mom posted on Facebook what Cole had dreamed up and the response was overwhelming! They SOLD OUT in less than 24 hours. Feverishly, they made more.  And sold out again!

Cole and Parker were anxious to get the donation to Grace Church. Together with his family and many friends, they presented Pastor Daron with a donation of $500.00 for our orphan homes in Thailand and Cambodia. Wow!

Because of generous donations from this family and many others, God has allowed Grace Church to rescue 87 orphans through our partnership with Asia’s Hope. Nine of those orphans are attending university or are graduating from university. Your gifts of love make a difference. We currently have need for several more orphan care donations/sponsorships to maintain and upkeep our current homes in Thailand and Cambodia. Lead courageously on behalf of orphans in Thailand and Cambodia by making a commitment to ongoing orphan care sponsorship or making a one-time donation.